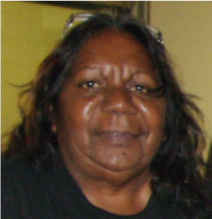 Senior Kimberley Walmajarri woman and traditional owner Annette Puruta Wayawu Kogolo is a NAATI accredited interpreter and AIWA Chairwoman. Annette completed the interpreting and translation course at Bachelor College in the Northern Territory in 1982 and has continued to provide interpreting in many fields since then. Her wealth of Kimberley-based experience expands several decades ranging from interpreting for the Aboriginal Land Inquiry (headed by Justice Paul Seaman) in 1983-84 to the Ngurrara Native Title Determination in 2007 (Justice Gilmore and Mr. Dan O'Dea, Member National Native Title Tribunal) and the coronial inquest in 2008 into Alcohol Harm and Youth Suicide in Aboriginal People in the Kimberley (Coroner Alistair Hope). She is also a founding member, was Chairperson of the Kimberley Language Resource Centre, and is a councilor for the Derby-West Kimberley Shire. Annette has also interpreted for health programs and social services more broadly. Annette is a strong advocate for Aboriginal Interpreting and responsible for cultural awareness programs, highlighting communication through Interpreting.

Australia has been home to Aboriginal Australians for over fifty millennia. When British colonisers arrived in 1788, over 500...